Posted on September 21, 2011 by Puneet Dhaliwal

The first of our film nights hosted at Rich Mix explored the concept of food sovereignty through a series of short films and discussions on the problems of the existing global food system and the need for, and viability of, alternatives. With well over 200 people in attendance, this was a fantastic occasion in bringing together a range of food campaigners and global justice campaigners with an interest in the politics of food.

Food sovereignty is a concept developed by La Via Campesina as an alternative to neoliberal policies. It focuses on local agricultural production, access of peasants to land, water, seeds, and credit, and popular participation in determining agricultural policy. More information can  be found in this video by La Via Campesina on food sovereignty. The global campaign for food sovereignty, which is growing in momentum, is therefore a crucial aspect of the fight for social, economic, and environmental justice. 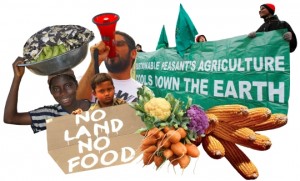 Discussion was animated and thought-provoking and we were fortunate enough to be joined by Kirtana Chandrasekaran, a food campaigner for Friends of the Earth International, and Dan Iles, a local food campaigner in Bristol and a UK delegate to the recent Nyeleni European Food Sovereignty Forum in August. A range of issues were addressed, including the significance of local grassroots action, the relative merits of food sovereignty and fair trade, and the potential of ‘traditional’ agricultural methods.

It was great to hear so much enthusiasm from everyone about getting involved in campaigning on food sovereignty. More information about our organisations’ food campaigns can be found on our respective websites. For those that were unable to attend our event or would like to spread the word about food sovereignty through local groups with similar events, many of the films we screened can be downloaded or viewed online:

The Real News report from Honduras

Not a very green revolution

I Eat Therefore I Am

Detroit: Rising from the Ashes